What is depression? We will analyze the causes of occurrence, diagnosis and treatment methods in the article by Dr. EG Magonov, a psychotherapist with 17 years of experience.

Definition of disease. Causes of the disease

According to the WHO definition, depression is a common mental illness characterized by persistent despondency and loss of interest in what is usually pleasurable, an inability to carry out daily activities, accompanied by feelings of guilt, and a decrease in self-esteem for 14 days or more. Signs of depression: a feeling of indecision, impaired concentration, psychomotor retardation or agitation, sleep disturbances, changes in appetite and weight.

In psychology, depression (from Latin depressio – suppression) is defined as an affective state characterized by a negative emotional background, a change in the motivational sphere, cognitive (cognitive) ideas and general passivity of behavior.

It is important to distinguish depression as a clinically expressed illness from a depressive reaction to a psychologically understandable situation, when each of us experiences a depressed mood for several minutes or hours in connection with a subjectively significant event. About 16% of people have experienced depression at least once in their lives. [one]

It has been noticed that women are significantly more likely to be diagnosed with depression, which is probably due to the fact that women are subject to large neuro-endocrine changes. This is due to a number of physiological characteristics of the female body – the menstrual cycle, the postpartum or climacteric period, during which the psychoemotional state can range from normal to clinically delineated depression. In addition, women are more likely to be diagnosed with depression due to their gender, social, psychological characteristics – for example, it is easier for women to talk about their emotional state.

Men usually seek help from a psychiatrist or a psychotherapist less often, because social stereotypes interfere with them: men should be rational, strong, “real men do not cry,” while depressive states in men are in direct connection with dependent forms of behavior (alcoholism, drug addiction , gambling addiction, extreme sports).

The risk of developing a depressive disorder is significantly increased in the following cases:

Currently, the generally accepted biopsychosocial model of the development of depression, according to which the causes of depression are social, psychological and biological provoking factors.

If you find similar symptoms, consult your doctor. Do not self-medicate – it is dangerous for your health!

How does a person feel with depression:

In addition, signs of depression include:

Recurring thoughts of death and suicide, or attempted suicide are a dangerous symptom of depression.

The thinking of a person suffering from depression is characterized by the presence of irrational ideas, cognitive errors:

The pathogenesis of depression

On the basis of available studies, it has been proved that disorders in neurotransmitter activity in neurons of the limbic system of the brain play a key role in the development of depression – the release and interaction with receptors of the postsynaptic cleft of such mediators as serotonin, norepinephrine, dopamine, acetylcholine, histamine, etc. change. 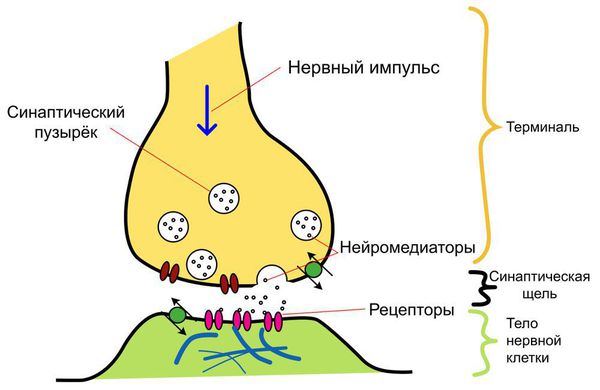 What Happens to Organism in Depression

Therefore, the drug approach in the treatment of depression is to prescribe antidepressants that regulate the release and interaction of neurotransmitters with receptors of neurons in the limbic system.

Classification and stages of development of depression

In the International Classification of Diseases of the 10th revision (ICD-10), depression is classified according to the severity and type of course.

Types of depression by severity:

With mild to moderate depression, a person usually remains able to work, although the quality of life decreases. Severe depression is characterized by the presence of typical symptoms of depression: low mood, decreased interest and pleasure in activities, increased fatigue, impaired work ability, and suicidal tendencies may be present [4] .

Up to 30-35% of patients have a chronic form of the course of depression, with a duration of depressive disorder of two or more years.

Also in psychiatry, it is customary to distinguish between depression by origin :

The American DSM-5 classification takes into account the phenomenological features of depressive disorder.

These include depressive symptoms:

Seasonal Affective Disorder is a type of depression associated with the changing seasons and begins and ends at about the same time every year. Most people with this type of disorder develop symptoms in the fall and continue into the winter months, less commonly in the spring or early summer [19] .

Globally, there is great economic loss due to disability and the cost of treating people with depression.

Why depression is dangerous

One of the most serious problems is the high probability of suicide in depression (8%). At the same time, of the total number of suicides, up to 60% are persons suffering from depression. [5] [6]

Therefore, timely diagnosis and provision of adequate medical care for people suffering from depression is so important.

A large proportion of patients with depression due to fear of the stigma of mental illness [7] and an abundance of physical manifestations (somatic “masks”) – headaches, dizziness, pain and heaviness in the chest, weakness, indigestion – first of all, seek advice from the polyclinic a network to general practitioners, where they can undergo examination and ineffective treatment for a long time, since they do not receive adequate help. [8] [9] [10]

Timely referral to a psychiatrist and psychotherapist helps to establish the correct diagnosis of depression and find an effective treatment.

In the diagnosis of depression, clinical scales are used – the Hamilton Depression Scale, the Zang, Beck and others scale [12] [13] [14] that determine the presence and severity of depression and its individual manifestations.

Unfortunately, there are still no precise laboratory tests and studies that could show the imbalance of which particular mediators led to the development of depression in a particular patient.

Until the condition improves, the doctor monitors patients 1-2 times a week. During the appointment, the doctor supports the patient, gives the necessary explanations and monitors the progress. The meeting at the doctor’s office can be supplemented by a conversation with the patient on the phone. The physician should explain to the patient that depression is not a feature of mood and character, but a serious illness caused by biological disorders and in need of treatment, in which the prognosis is favorable. Also, the doctor should discreetly convince the patient to expand daily and social activities, for example, walking more often in the fresh air or enrolling in a creative circle. It is important for the doctor to convey to the patient the understanding that the disease is not his fault, that negative thoughts are only a part of this state and they will soon pass [20] .

For moderate and severe depressions, the use of a combination of psychopharmacotherapy (antidepressants) and psychotherapy is more effective.

Today, serotonergic antidepressants and so-called double-acting antidepressants (affecting the exchange of serotonin and norepinephrine) are widely used, which are used for 3 months or more (the average duration of therapy is 6-12 months).

Taking antidepressants should take place under the supervision of a physician and, despite prolonged use, usually does not lead to dependence, is well tolerated.

If depression does not respond to treatment, has become chronic, is prone to recurrence, antidepressant therapy can be supplemented with other psychotropic drugs – tranquilizers, neuroleptics, anticonvulsants.

In addition to outpatient treatment of mild to moderate depression, severe depression should be treated and monitored in a hospital setting.

Psychotherapy in the treatment of depression

In psychotherapy of depression, cognitive-behavioral psychotherapy is provingly effective and fast-acting, aimed at changing irrational beliefs and depressogenic patterns of behavior in patients, and psychodynamic psychotherapy (psychoanalytic, existential psychotherapy, gestalt psychotherapy), focused on working through early experience and deep-seated experiences, is widely used. patient, the formation of adaptive functioning in the present [15] [16] .

Electroconvulsive therapy (ECT), due to the presence of a wide list of contraindications, adverse reactions and complications, is of limited use. But in cases of severe depressive disorder and drug resistance, ECT can be used and is proving to be effective [20] .

How to get rid of depression on your own

In the case of a depressive reaction to a stressful situation or depression of mild severity, you do not need to consult a doctor, since the manifestations of depression do not lead to maladjustment. It will help a person if he is distracted from a stressful situation and plunges into work or hobbies. Also, the support of a close environment or a visit to a psychologist can help alleviate the condition. But if the condition drags on, becomes heavier and leads to social maladjustment, then in this case the help of a specialist is needed – a psychiatrist, a psychotherapist.

What to do if a loved one is sick with depression

Sincere support, empathy, compassion, and an offer to seek the help of a specialist will be important for a person suffering from depression from the close environment.

A significant proportion of patients do not receive adequate improvement from antidepressant therapy, have drug resistance or poor tolerance to drug treatment. [17] In these cases, an alternative is non-drug methods of biological therapy (for example, electro-convulsive therapy is often used abroad for resistant depressions), as well as psychotherapy. [18]

Without adequate treatment, depressive disorder has a high risk of recurrence, worsening of the course, and the appearance of a suicidal mood in the patient.